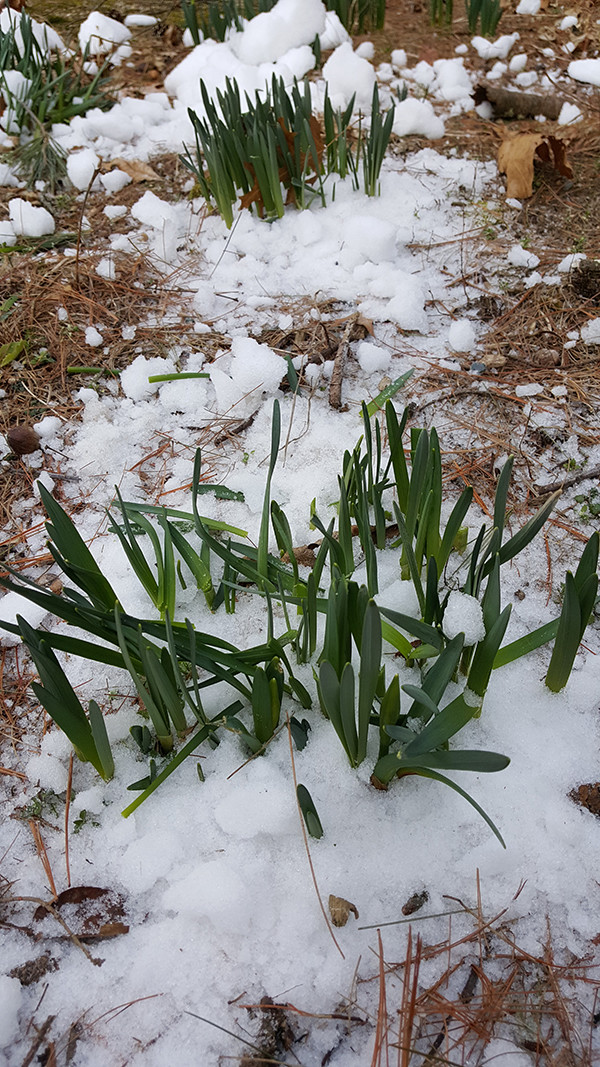 Spring bulbs have emerged early. Despite snow and cold weather after emergence, bulbs should flower normally, but probably early this season.

This winter’s warm temperatures and the effects of El Nino are certainly a far cry from last year’s cold, snow and seemingly non-ending winter. SeaScape is expecting, and is ready for, an early spring, although forecasters warn that we could always get a major storm late in an El Nino winter.

Lawns should start the spring in good shape, despite the recent cold snap and snow. Many lawns are still green, especially in areas protected from the wind or on south-facing slopes. Gone should be the snow mold from last year which caused most lawns to deteriorate and look brown and water-soaked as the snow finally melted.

Lawns will continue to consume nutrients throughout a mild winter like this one. Without an early fertilization, lawns will be hungry right at the critical time that they begin again to actively grow. Receiving your first application early will be important this spring.

Several spring flowering trees and shrubs flowered with warm weather in December. Cherry trees and forsythia were both seen flowering in protected areas. Unfortunately, their flowering is done for the year and flowering in the spring will be reduced. If only a portion of the plant flowered, such as on the south side, some spring flowers may still form.

Spring flowering bulbs have already emerged in many yards, especially on the south side of homes and in full sun areas. These bulbs should flower early, but the flowers have not been harmed by the alternating warm and cold temperatures or snow that falls after they have begun growth.

For a free estimate on your property contact us today.

Snow mold that deteriorated so many lawns last spring should not be an issue with this year’s warm temperatures. This year, lawns should begin the spring green, not brown.